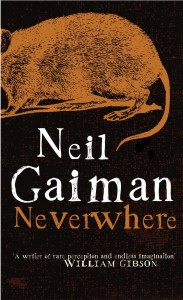 Richard Mayhew is an unassuming young businessman living in London, with a dull job and a pretty but demanding fiancee. Then one night he stumbles across a girl bleeding on the sidewalk. He stops to help her–and the life he knows vanishes like smoke.

Several hours later, the girl is gone too. And by the following morning Richard Mayhew has been erased from his world. His bank cards no longer work, taxi drivers won’t stop for him, his landlord rents his apartment out to strangers. He has become invisible, and inexplicably consigned to a London of shadows and darkness a city of monsters and saints, murderers and angels, that exists entirely in a subterranean labyrinth of sewer canals and abandoned subway stations. He has fallen through the cracks of reality and has landed somewhere different, somewhere that is Neverwhere.

“Richard wrote a mental diary in his head.
Dear Diary, he began. On Friday I had a job, a fiance, a home, and a life that made sense. (Well, as much as an life makes sense). Then I found an injured girl bleeding on the pavement and I tried to be Good Samaritan. Now I’ve got no fiance, no home, no job, and I’m walking around a couple of hundred feet under the streets of London with the projected life expectancy of a suicidal fruit fly.” (‘Neverwhere’, Neil Gaiman)