Nicola Sturgeon is MSP for Glasgow Southside, Leader of the SNP and First Minister of Scotland. She is Scotland’s fifth leader – and first woman leader – since the establishment o f the Scottish Parliament and government in 1999. The First Minister has been an open supporter of literature in Scotland, launching initiatives including The First Minister’s Reading Challenge, which aims to build on the work already taking place in schools across the country to encourage children to read widely, explore a range of books and develop a love of reading. The main focus of the Challenge is to encourage reading for pleasure and support schools, libraries and communities to build reading cultures. 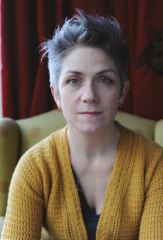 Denise Mina studied for a PhD at Strathclyde, misusing her student grant to write her first novel. This was Garnethill, published in 1998, which won the Crime Writers Association John Creasy Dagger for Best First Crime Novel. She has now published over 12 novels and also writes short stories, plays and graphic novels. She regularly appears at literary festivals in the UK and abroad, leads masterclasses on writing and was a judge for the Bailey’s Prize for Women’s Fiction 2014. She has won numerous awards for her writing including the McIlvanney Prize in 2017.

Panels: Reading Between the Lines and Publishing vs the World

Saba Ahmed is the Associate Publisher at Tilted Axis, and Editorial Production Manager at And Other Stories. She has previously worked at a small literary agency in Notting Hill and a large publishing company in King’s Cross.

Nicole is Scottish Book Trust’s Young Writers Programme Manager and she looks after the What’s Your Story? programme. She helps everyone come together and work as a team, and makes sure creative work is well looked after. Nicole has a masters degree in Creative Writing and in her spare time can be found writing screenplays.

Jenny Brown established Jenny Brown Associates in 2002 and now represents 50 writers of literary fiction, crime writing and non-fiction. She was previously Head of Literature at the Scottish Arts Council, presenter of book programmes for Scottish Television, and founder Director of the Edinburgh International Book Festival (of which she is now a Board member).

Sarah Cleave is Publishing Manager at Comma Press, an independent publisher specialising in the short story. She recently edited Banthology: Stories from Unwanted Nations, and was shortlisted for the London Book Fair 2018 Trailblazer Awards.

Eleanor edits children’s fiction and adult non-fiction at Floris. She has also edited many works of adult fiction and academic books. Her doctoral research involved a long wallow in novels and narrative theory.

Denise is a freelance editor and proofreader based in Glasgow. She specialises in non-fiction, particularly education and business, and edits for a variety of global publishers, companies and organisations. She is an Advanced Professional Member of the Society for Editors and Proofreaders, and in September 2017 she was elected to its council as Marketing and PR Director.

Niall Dolan is the CEO of The John Byrne Award. He’s been working within the environmental and charity sectors across Europe and Asia and North America for over 10 years. In 2014 Niall began co-ordinating The John Byrne Award competition in high schools in Edinburgh on a part-time basis. In 2016, Niall assumed the CEO role and has since been working to build the charity into a nationally-recognised organisation that facilitates debate about our values on a national level.

Zetta Elliott holds a PhD in American Studies at NYU. She is the author of over 25 books for young readers, including the award-winning picture books Bird and Melena’s Jubilee. Her own imprint, Rosetta Press, generates culturally relevant stories that center children who have been marginalized, misrepresented, and/or rendered invisible in traditional children’s literature. Elliott is an advocate for greater diversity and equity in publishing.

Natalie Fergie’s debut novel The Sewing Machine, was published in April 2017 by Unbound and has sold more than 20,000 copies. Rights have been sold to Random House Germany, to Greece and others.

Laura Jones is one half of the alternative, award-winning publisher 404 Ink & a book production and promotion freelancer. She is on the board of crime writing festival Bloody Scotland and jointly the Saltire Society’s Emerging Publisher of the Year, 2017.

Smita is a Lecturer in Intellectual Property Law. She combines legal expertise in copyright and related rights with socio-legal research on intellectual property law in the ‘real world’. She has examined how copyright intersects with the everyday lives of professional writers, musicians, artists and performers, digital artists, online creative communities, & arts and humanities researchers.

Kirstin Lamb is the PR and Rights Manager at Barrington Stoke. Kirstin was the Co-Chair of SYP Scotland for 2016-2017 and was shortlisted for the Saltire Society Emerging Publisher of the Year in 2017.

Heather is an award-winning freelance writer and one half of alternative publisher 404 Ink.

Gala joined the Hidden Door team in 2017 to deliver the Kickstarter crowdfunding campaign, which raised over 21k from the original 10k target. She has experience in fundraising for charity and not-for-profit organisations.

Jenny is the Head of Literature, Languages and Publishing at Creative Scotland. She was formerly Associate Director at the Wheeler Centre for Books, Writing and Ideas in Melbourne, the centrepiece of the City’s designation as a UNESCO City of Literature. She arrived in Australia following six years in China, where she was inaugural director of the city’s first book festival and literary events program, The Bookworm International Literary Festival. In Winter 2016-17 Jenny was interim director of the Edinburgh International Book Festival.

Originally from Buenos Aires, Carolina Orloff, is an experienced translator and researcher in Latin American literature. In 2016, Carolina co-founded Charco Press where she acts as main editor. She is the co-translator of the Republic of Consciousness longlisted novel Die, My Love by Ariana Harwicz.

James Robertson is a poet, fiction writer, editor and publisher. He is a co-founder of, and contributing editor to, Itchy Coo, an imprint specialising in books in Scots for younger readers. For Itchy Coo he has translated works by Julia Donaldson, Roald Dahl and A.A. Milne, and he has also translated into Scots from French and Gaelic.

Claire Stewart has worked across a variety of sectors but with her feet firmly rooted in the creative sector, as a programmer specialising in initiating new ideas, creative planning and business strategy for large scale and ambitious projects. Claire joined Creative Edinburgh as Director in April 2017 and retains a seat on our Board of Directors. Her special interests include literature, festivals, technology, live and electronic music and libraries.

Laura Waddell is a Publishing Manager at HarperCollins, previously working in translated fiction and independent publishing. She writes for a number of publications and sits on the boards of Scottish PEN and Gutter Magazine.

Kaite Welsh is an author, journalist and writing tutor. Her debut novel THE WAGES OF SIN is published by Headline, she has a column on LGBT issues for the Daily Telegraph, appears regularly on BBC radio and is Books editor at DIVA magazine. She is currently running a series of creative writing workshops for the National Library of Scotland.

Katie West runs Fiction & Feeling publishing company, whose aim is to elevate underrepresented voices and topics. She lives in Edinburgh with her partner and their cat. She successfully crowdfunded the title Becoming Dangerous on Kickstarter in 2017.