This week each SYP branch announced their mentors for the upcoming mentorship scheme.
The Oxford Committee is covering all of Oxfordshire.
If you are based in the Oxfordshire area, you could be paired with one of the mentors listed below. Applications open on Monday 28 September and close at 11:59pm on Thursday October 8. Details on how to apply will be available on the SYP homepage soon.
But for now, let us introduce you to our second batch of mentors taking part in the 2020 SYP UK & Ireland Mentorship Scheme… 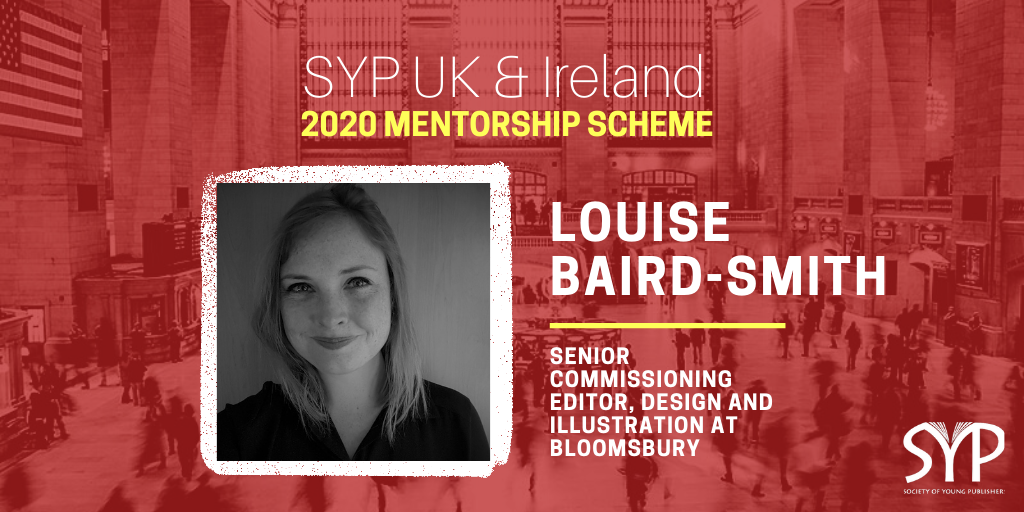 Louise Baird-Smith has been working in academic publishing for over ten years. Unlike a lot of editors who come from a literature background, she has a psychology degree so comes to publishing from a slightly less usual route. Louise started out at Routledge/Taylor & Francis on the Built Environment book lists (planning, landscape, architecture, etc.) as an Editorial Assistant, and was promoted up through to Commissioning Editor. She is now a Senior Commissioning Editor in the Visual Arts team at Bloomsbury, working particularly on design and illustration titles for academic, student and professional audiences. Over the last few years Louise has mentored students hoping to join the industry, as well as junior members of staff already working at publishing houses across a variety of teams. 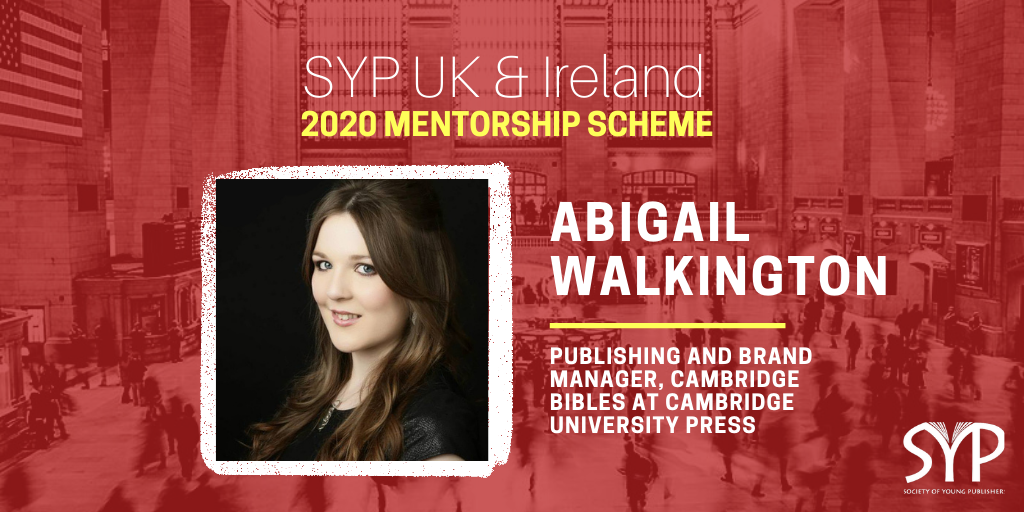 Abigail Walkington is the Publishing and Brand Manager for Cambridge Bibles, the oldest department within Cambridge University Press. Her role involves creating publishing and marketing strategies to support the Cambridge Bibles brand, sales analysis and financial planning for the list, managing licensing activities, and working closely with external partners. Abigail has worked at the Press for five years. Prior to this role, she worked as an Editorial Assistant for Mathematics, Statistics and Computer Science, and a Senior Editorial Assistant for History and Area Studies. Abigail studied History at Cambridge University and graduated in 2015. Originally from Grimsby, she now lives in Cambridge and has spent the last two years doing up a dilapidated terraced house. During the lockdown, she has been using the spare time at home to get back into reading.

Lottie is Editorial Assistant on the Psychology list at Routledge, a role she began after graduating in 2018. She first got interested in publishing when interning at a literary agency on her year abroad, and went on to volunteer for the SYP as 2017 student liaison officer and 2019 Conference Co-Captain. She believes publishing is the best industry with the best people, and is excited to help open it up to as many passionate applicants as possible! In her spare time she bakes, reads (of course) and blogs on charlottesagan.wordpress.com.
Twitter: @LottieMapp 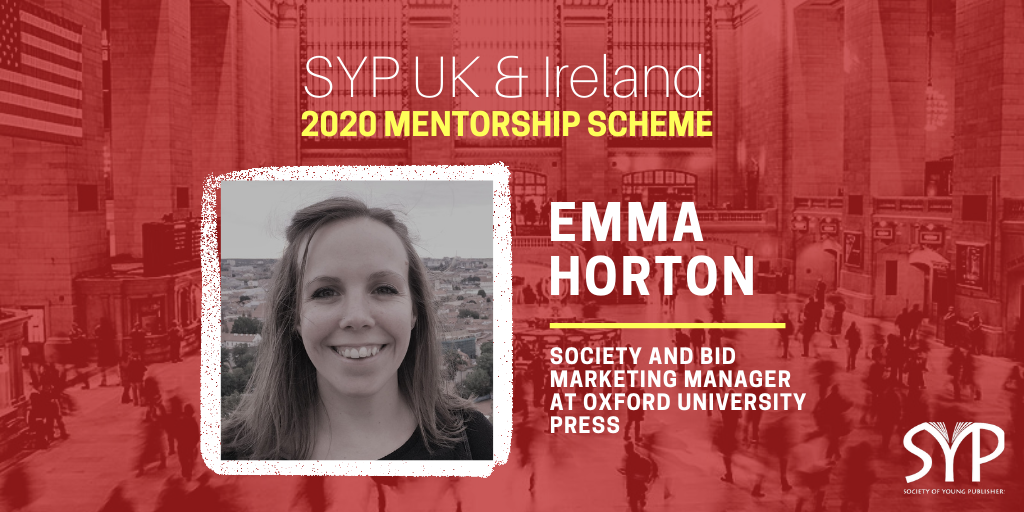 Emma Horton is a Society and Bids Marketing Manager at Oxford University Press, focusing on the needs of the society community, driving engagement and brand awareness of OUP products and services to this market, and helping acquire new journals and retain existing society contracts. She has been working in journals marketing for over ten years, at OUP and previously at Taylor & Francis, and is passionate about developing new relationships, learning, and continuously improving her marketing skills. Emma holds a BA in Publishing from Oxford Brookes University and a Professional Diploma in Marketing from the Chartered institute of Marketing. 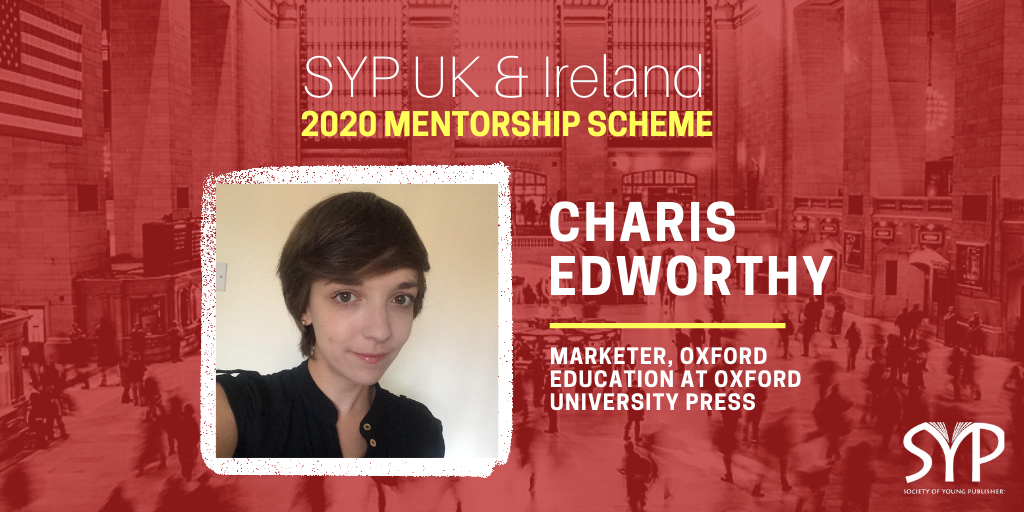 Charis Edworthy is a Campaign Coordinator in the Primary Schools marketing team at Oxford University Press. She has three years of experience is marketing roles at OUP across the Academic and Education divisions, and volunteers as an Events Officer for SYP Oxford in her free time.
Twitter: @charis_ed 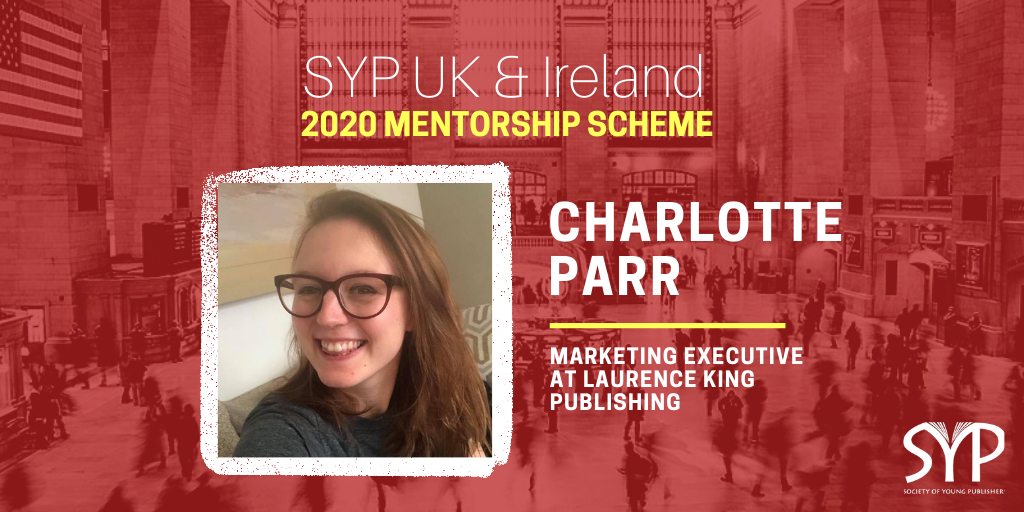 Charlotte Parr began her career in books as a children’s bookseller at her local Waterstones, where she managed their book club, social media, and ran in-store events. Her first job in publishing was as a Marketing and Content Executive at Bolinda Audio, working closely with libraries across the UK and Ireland. Since then she has worked in Journals Marketing at Oxford University Press and is now at Laurence King Publishing marketing books for fashion, film, architecture, and design students. Charlotte has a BA in English Literature and American Studies. She is a diehard fan of V. E. Schwab and cannot wait for ‘The Invisible Life of Addie LaRue’ to be on her bookshelf. Recent favourite reads include ‘A Deadly Education’ (Naomi Novik), ‘Black and British: A Forgotten History’ (David Olusoga), ‘The Switch’ (Beth O’Leary) and ‘The Court of Miracles’ (Kester Grant).
Twitter: @crowdedbookblog
Instagram: @charlotte_elizabeth_22 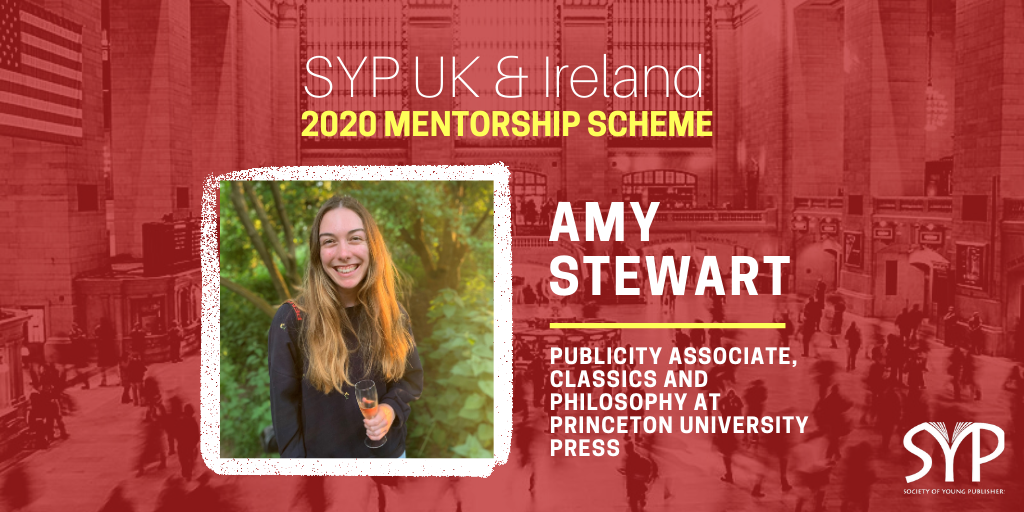 Amy Stewart is a Publicity Associate at Princeton University Press, managing campaigns for the press’ humanities list in the UK and Europe. She has worked at PUP for three years, starting out as a Publicity Assistant. Amy completed a Classics BA at the University of Bristol and was on the editorial team for the student newspaper Epigram for two years. She was an Events Officer for the Society of Young Publishers’ Oxford branch in 2019 where she organized and chaired several events, such as ‘How to Pitch a Book’ and ‘Literary Agents Q&A’.
Twitter: @amyhanstewart 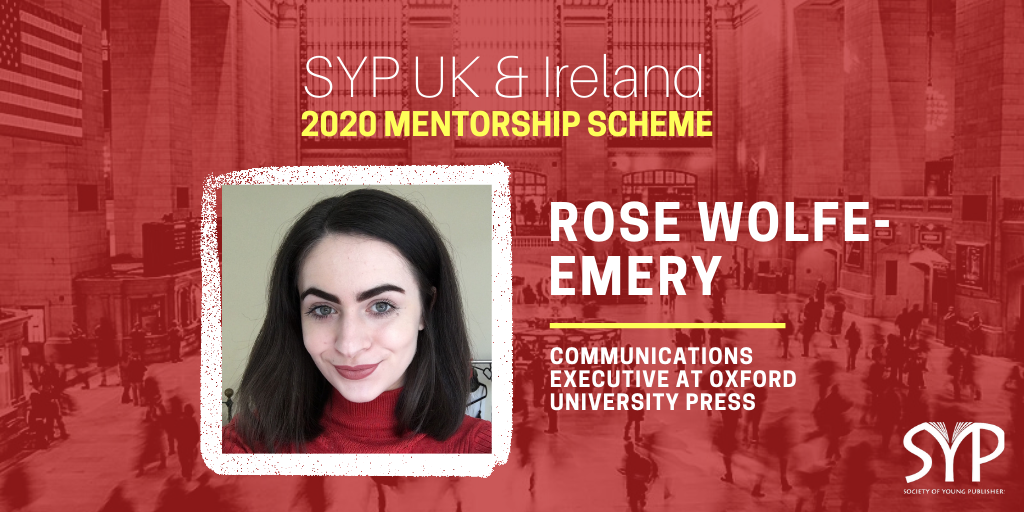 Rose Wolfe-Emery is an Internal Communications Executive at Oxford University Press, on secondment from her first role in publishing as a Publicity and Marketing Assistant. She also volunteers as a Communications Officer for SYP Oxford.
Twitter: @rosewolfeemery 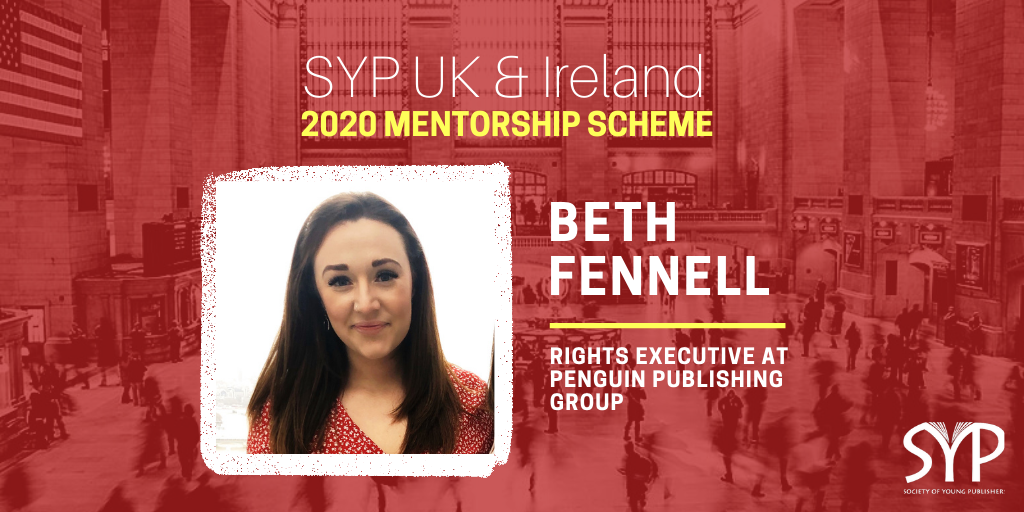 Beth Fennell is a Rights Executive in the Penguin Random House Children’s division. Her role encompasses working with foreign publishers and understanding foreign book markets. It also involves working alongside internal departments such as Editorial and Production, as well as marketing and publicity teams. This helps to give her an extensive overview of the company as a whole. Prior to this, Beth started out as a Rights Assistant and then became a Rights Executive in Oxford University Press’s Academic division, which was her first role in publishing. 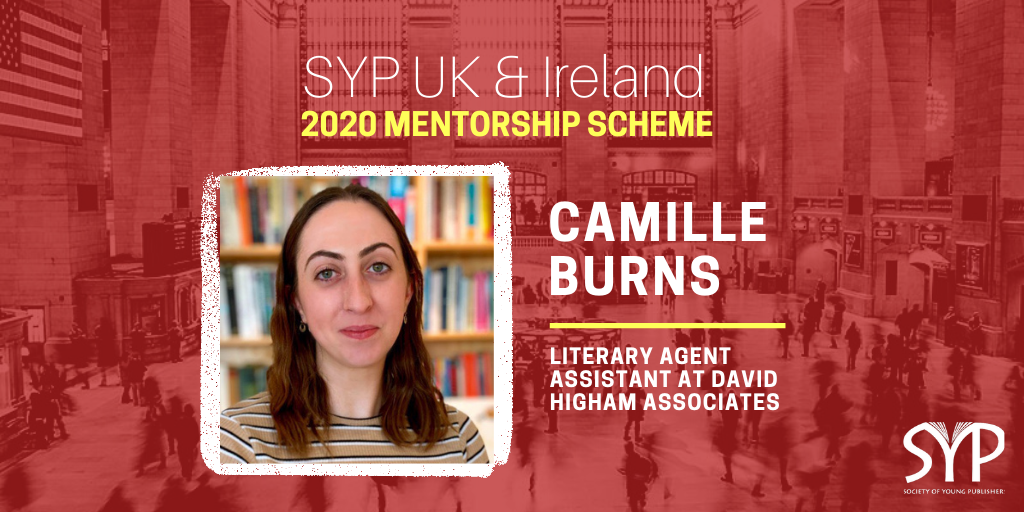 Camille Burns joined David Higham Associates in July 2019. At the agency, she has a unique split role as assistant to long-time crime and thriller agent, Jane Gregory, as well as supporting the children’s translation rights team. This means she deals with clients and books ranging from Val McDermid to Roald Dahl, and everything in-between! Previously, she was an intern at Felicity Bryan Associates in Oxford, worked as the Rights Executive and Digital Content Editor at Bolinda audio, and was Editorial Assistant on the Language Learning list at Routledge/Taylor & Francis for three years. She has a Masters degree in Publishing from Edinburgh Napier University, as well as a Masters in English Literature from the University of Edinburgh. Recent book favourites include ‘The Wicked King’ series (Holly Black), ‘Daisy Jones and the Six’ (Taylor Jenkins Reid), ‘Hello Now’ (Jenny Valentine), ‘Fleishman is in Trouble’ (Taffy Brodesser-Akner) and ‘Difficult Women’ (Helen Lewis).
Twitter: @La_Camille 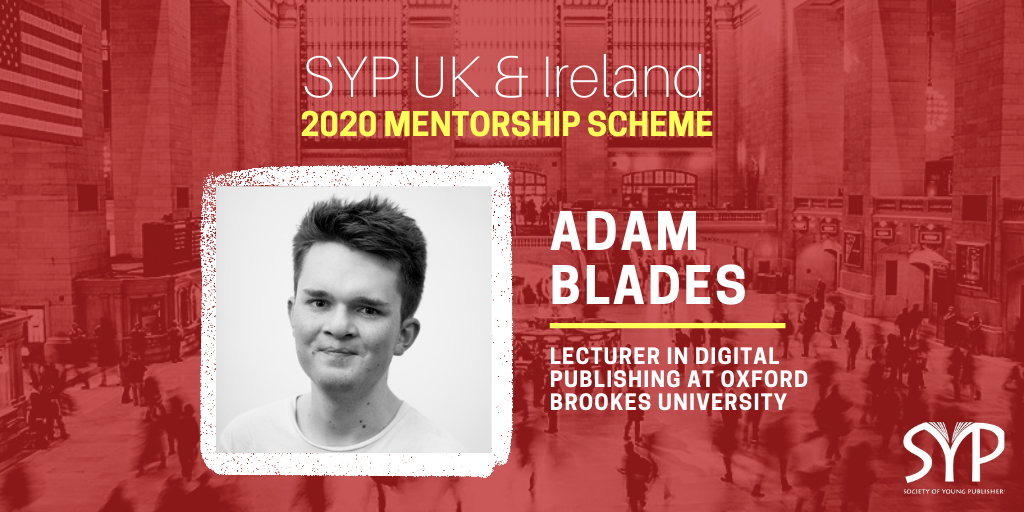 Adam Blades comes from the competitive world of London freelancing, where he built web products and services for companies like Zurich Insurance and LegalWeek, while also working at global technology bootcamp General Assembly. With an intimate knowledge of the publishing course that comes with being an ex-student, he is passionate about creating meaningful learning experiences that help students develop perennial skills. 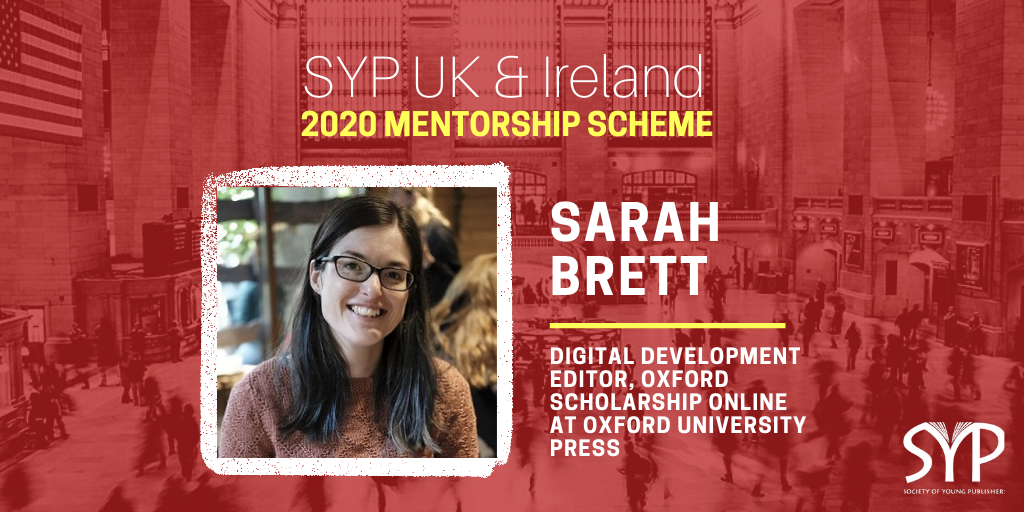 Sarah Brett started her career in publishing in 2006, fresh from a BA in English Literature and Philosophy. She began working for OUP as an Editorial Assistant in the Higher Education department, where at the time the publishing was focussed on print books. Sarah quickly realised she had more of an interest in digital publishing, and moved into the web team in HE, creating ancillary online resources to support the textbooks. From there, following a restructure, Sarah transferred to the editorial team responsible for the online publication of academic monographs and scholarly editions. She been working in that team for eight years and has witnessed many changes within OUP and in the wider publishing industry during her career. Sarah’s specialist areas of expertise are digital publishing, XML, Academic books, and managing freelancers. 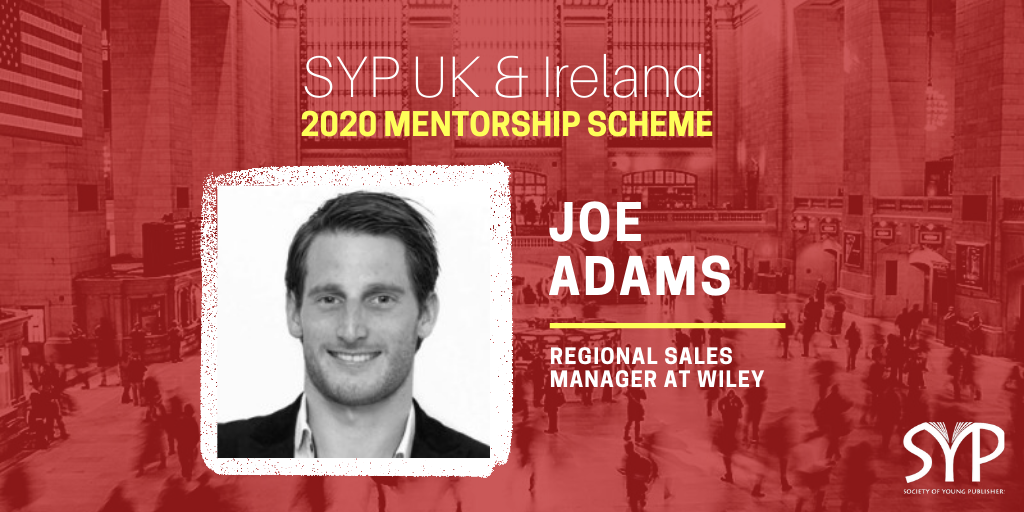 Joe Adams has been with Wiley for nine years. He manages the corporate sales team in EMEA and sits on the global healthcare corporate sales leadership team at Wiley. Joe has over ten years of experience in publishing, working across a range of journals, newspapers and websites in numerous roles, with experience in editorial and sales positions. His team is based across EMEA, with team members in Denmark, Spain, Italy and the UK. When not working he spends his time sailing and when possible enjoys running, hiking and skiing. 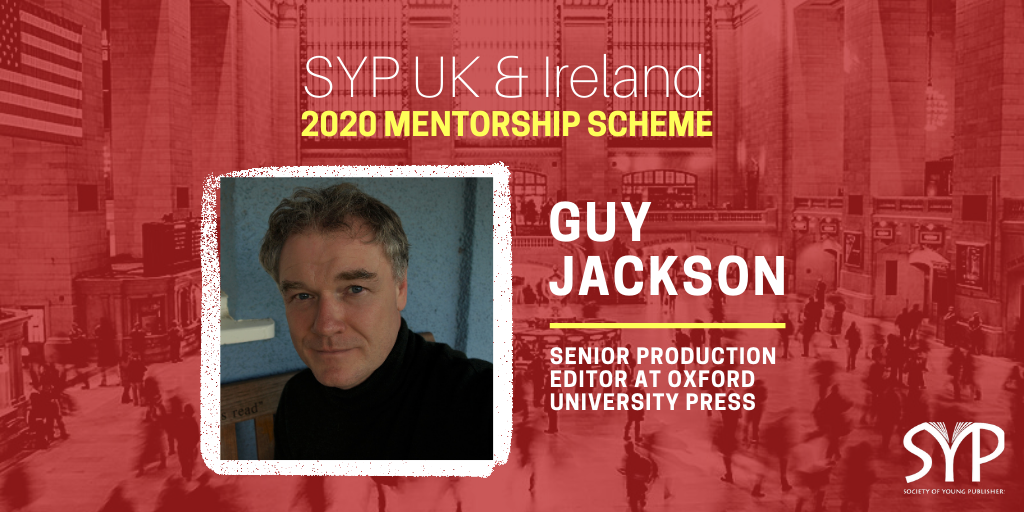 Guy Jackson has spent most of his publishing career writing, editing, and project-managing print and digital dictionaries and ELT products for Cambridge University Press and Macmillan Education. After an interlude with Bradt Travel Guides, he joined Oxford University Press as Senior Production Editor in the Academic and Higher Education divisions. 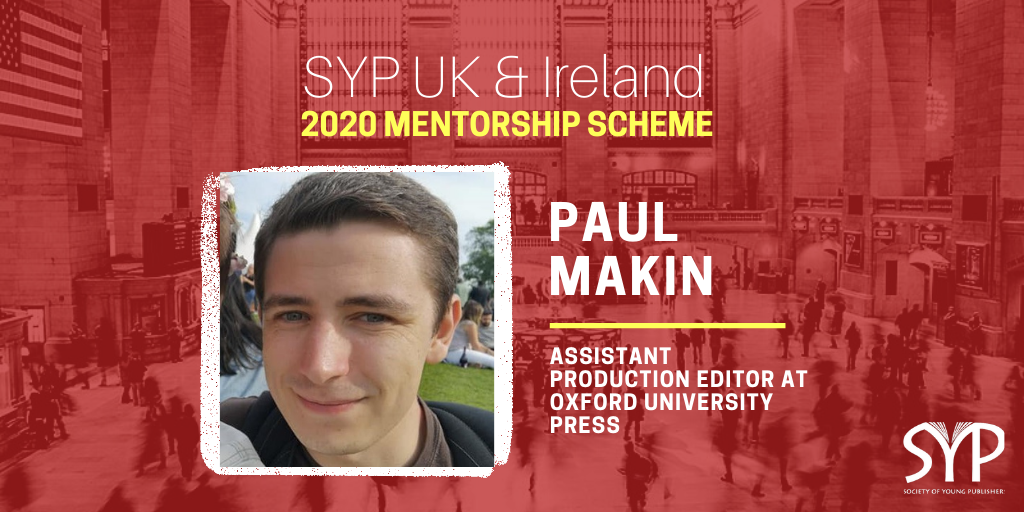 Paul Makin holds a BA in Media Arts from Royal Holloway, University of London and a MSc in Publishing from Edinburgh Napier University. He currently works in Journals Production at Oxford University Press as an Assistant Journal Manager. In addition to his work in production, he has experience of design, typesetting and works as an occasional manuscript reader for award winning indie publisher Sandstone Press. He once survived six years as a primary school art teacher and is the proud author of three poor- to middling-quality novels that will never see the light of day. If he could eliminate any font from existence, it would be comic sans.
Twitter: @PaulXMakin
Instagram: @PaulXMakin 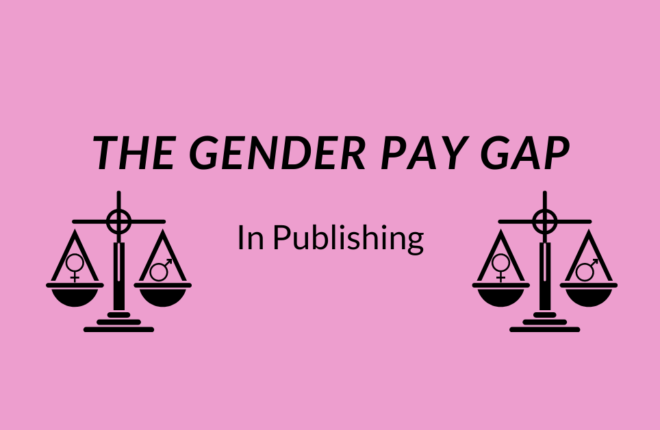 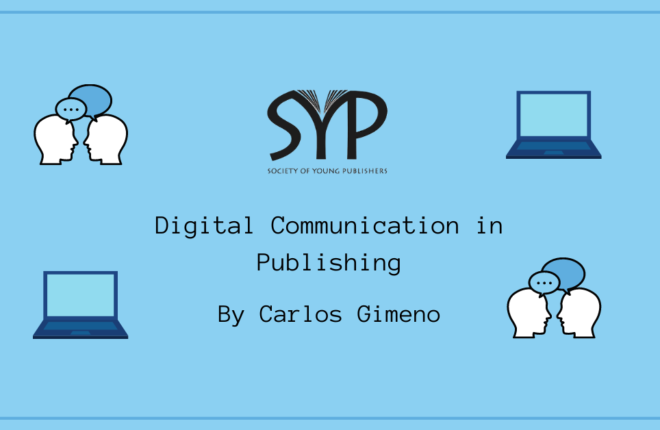