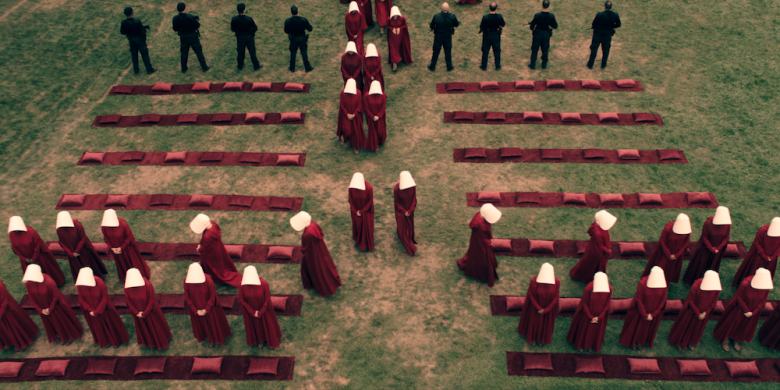 ‘Some books haunt the reader. Others haunt the writer. The Handmaid’s Tale has done both.’ Margaret Atwood

Great dystopian literature will never cease to give us goose bumps from Orwell’s Nineteen Eighty-Four to Alderman’s The Power. It’s often hard for adaptations to create the same feeling of uneasiness we had from reading the novels, however, Hulu’s version of The Handmaid’s Tale reflects Atwood’s totalitarian Republic of Gilead and its Christian theonomy with brutal veracity.

4 out of 5 of the directors are women in this chilling adaptation where the 1985 novel is updated with references to Twitter and Craiglist. Atwood helped to modernise the dialogue in transforming to the screen and, according to showrunner Bruce Miller, she asked the scriptwriters to explain the meaning of Ofglen’s use of ‘carpet munchers’. There was consistent back-and-forth with Atwood over the discussion of TV vs. literature—and what is acceptable. In the novel, people with dark skin are consisted as descendants of Ham (Abel’s son in the Bible) and therefore cursed and forced to resettle. 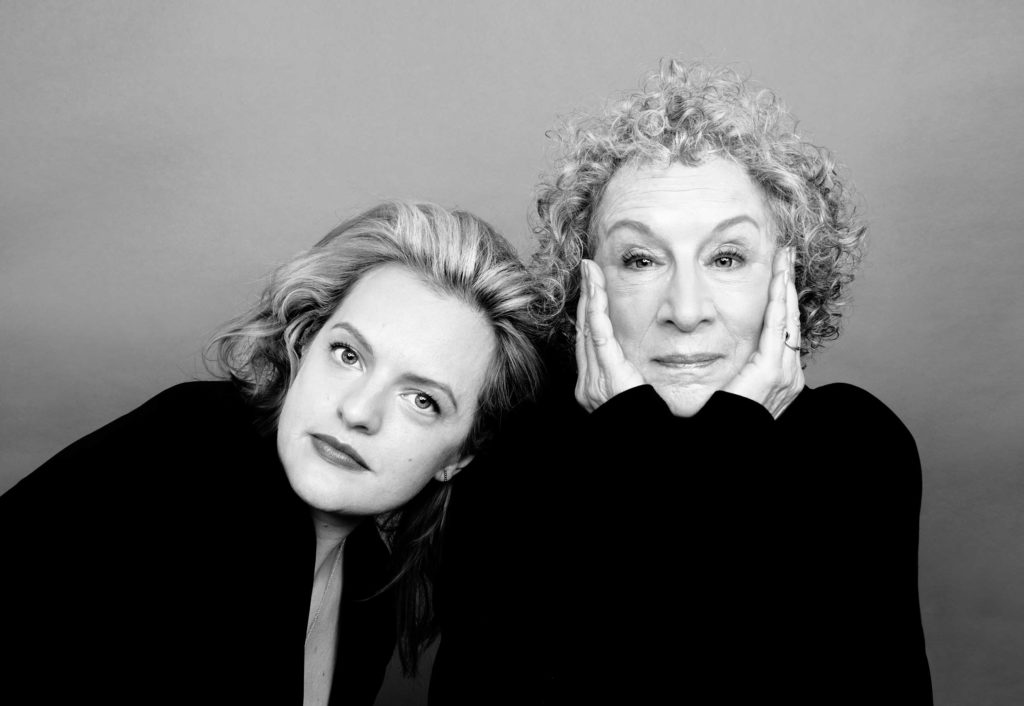 In the face of adversity—a plunging birth rate linked to radiation and other environmental disasters—the fundamentalism of Gilead is able to prevail with its credo to ‘return to traditional values’. In a brutal misreading of Old Testament hierarchies, the fertile women have been stripped of their rights, including being permitted to read (is it ironic that Atwood’s novel has been banned?), and wrangled up like animals to be sexual conduits between husbands and their ‘infertile’ wives. (It’s murmured that the men may be unfertile, but cannot be openly announced.) While Atwood’s commentary borders on hyperbole, critics are comparing it more and more to Trump’s America, or even to the ideals of the BNP who form our coalition government.

The fertile women are known as ‘the handmaids’ and the novel’s title plays on the parts of Chaucer’s The Canterbury Tales. We are shown the world mostly through the perspective of Offred (literally Of Fred), played by Elisabeth Moss of Mad Men, and shown flashbacks to her previous life: before, during, and after the coup. The actresses have said that the white hats they wear outside act like blinders put on horses, completely obscuring their peripheral vision. Unless they look directly at one another, they are unable to see. 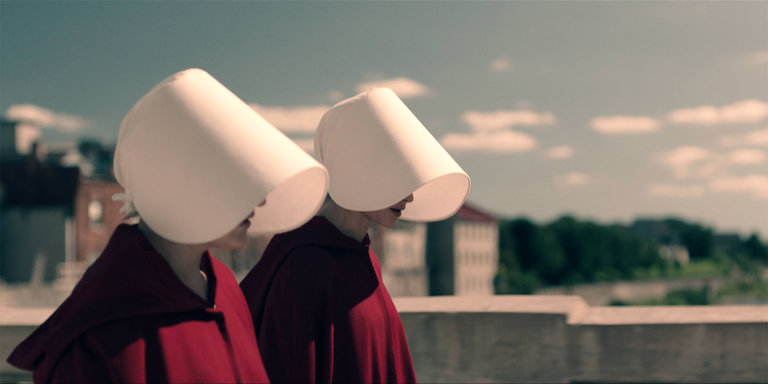 It can often be a hard pill to swallow that Fred, ‘The Commander’, is played by the gorgeous Joseph Fiennes! (In the novel he’s described as being wrinkled with grey hair.) There are glimpses where the handmaids show small triumphs when they pull away to rebel (although they’ll be punished by eye gouging, sexual mutilation, or death), or when they bond as a pack. Offred says her real name is June, but we’re unsure if this is a pseudonym due to its connotations with Mayday (the underground anti-establishmentarian society). Atwood also notes that she never intended her to be called June, but ‘readers are welcome to it if they wish’. The only thing giving Offred strength through her brutal subjugation is her need to survive for her daughter.

Dialogue is abrupt and confined to cult-like one-liners: ‘blessed be the fruit’; ‘May the Lord open’. Moss is spellbinding. Even cinematic angles sharply focusing on her face make viewers on edge. There are subtle jokes cruelly thrown in for good measure: the handmaids (Offed and her shopping partner, Ofglen (Alexis Bledel of Gilmore Girls)) take a relaxing detour along the river to admire the scenery, but this is where we feel the claustrophobia of blood stains walls where ‘they’ are hanging a ‘gender traitor’ alongside a priest and a doctor. Speaking of what happens to ‘gender traitors’: 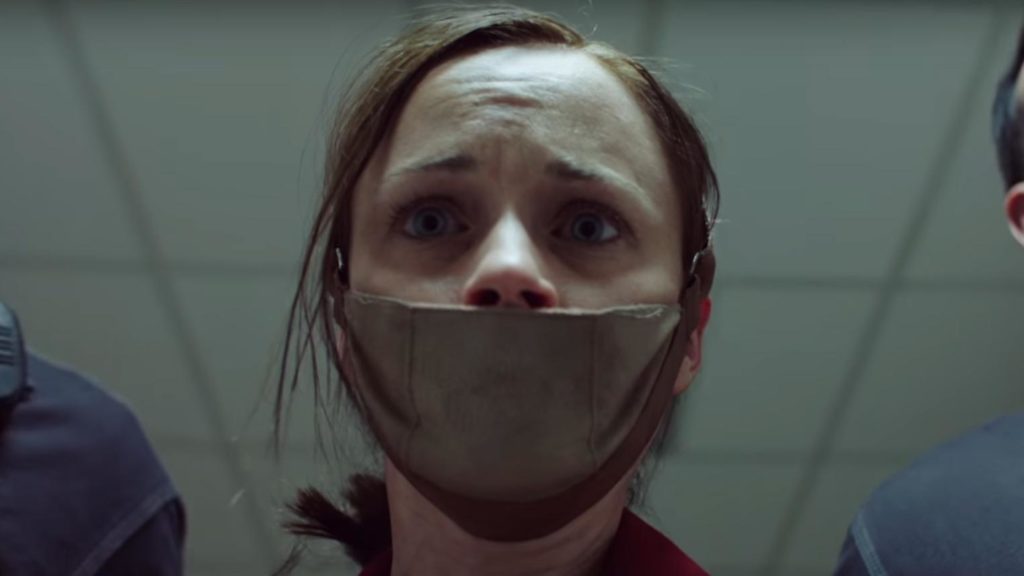 It’s hardly comic relief that the show is peppered with spots of black humour. During an illicit game of Scrabble between Offred and the Commander, one of the words used is ‘zygote’—an egg that has been fertilized by sperm. In episode one, the Commander’s Martha (female housekeepers) observes that ‘The Commander likes his eggs lately – make sure they’re fresh’. Ahem.

Aunt Lydia: ‘When I blow the whistle, what you do is up to you.’

The ending of the first episode further shows the reduction of the handmaids to animals as they massacre a convicted ‘rapist’. (Again, poignant as one wonders what Gilead’s interpretation of rape is.) Speaking of episode one, did anyone see Atwood make a cameo as the Aunt who slaps Offred when she doesn’t want to join the group shaming circle?

The music is stark and well-chosen akin to Offred often singing songs in her head in the novel. Funnily enough the final track of the first episode is women power anthem You Don’t Own Me by Lesley Gore.

We don’t want to give too many plot spoilers, but the recent adaptation is spectacular. You need to watch it. But don’t do what I did and binge watch six episodes. Also, don’t expect there only to be one season. I made the mistake of thinking everything would be bright and shiny at the end of episode ten.