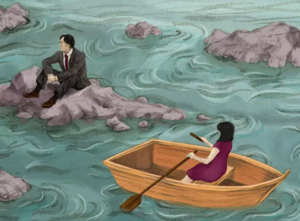 ‘You are a pastel-coloured Persian carpet, and loneliness is a Bourdeaux wine stain that won’t come out.’

I was in a bookstore a couple of days ago and a woman bogarting the Jeanette Winterson section told her friend, ‘I don’t like short stories; it makes me feel like I haven’t eaten properly.’ I won’t deny that I much prefer Haruki Murakami’s novels to his show of shorts, but Murakami’s first collection of short stories in over a decade delivers yet again.

Men Without Women is another melancholy collection mixing between magical realism and the everyday. Five of the seven short stories had already been published—‘An Independent Organ’ and ‘Men Without Women’ are the only originals. He continues his go-to first person narrative, in the tradition of the Japanese ‘I Novel’, teasing readers into craving another story from a dowdy housewife Sherazade; offering a taste of his expert magical realism in Kino; and twisting perceptions in Samsa in Love by offering an inversion of Kafka’s Metamorphosis.

It’s often thought that Murakami’s short and snappy sentences coupled with his exaggerated metaphors and similes make him the most easily translatable Japanese author (Strecher, 2002), nonetheless the two translators, Philip Gabriel and Ted Goossen, make it look effortless and it’s hard to spot the difference in intonation or rhythm. Could you imagine being flattened ‘like a sand castle under an exuberant Labrador retriever’?

Perhaps part of the reason he’s so transferable is that the stories are saturated with non-Japanese cultural influences, particularly with relation to Western music and literature—yet again he names his stories after Beatles’ songs. In Drive My Car, Veteran actor, Kafuku is no longer able to drive his car due to an unfortunate incident involving some booze and an immovable obstacle. He has some interesting observations about women drivers—so much so that it made me question if I am one of the brusque ones that thinks she’s a good driver. Kafuku is currently rehearsing for Uncle Vanya—although it may as well have been Swan Song—and hires an unobtrusive female chauffer. When she asks him why he doesn’t have any friends, it becomes a discussion about his wife’s infidelities and how after her death he befriended one of her ex-lovers. Obsessive and wonderfully vulnerable, Drive My Car offers a look into a kaleidoscope of humour and despondency: ‘his heart was torn and his insides were bleeding.’

Yesterday is the second Beatle’s song of the novel, and not the only time that lyrics and stories will be rewritten by the characters. Tanimura’s friend, Kitaru, feels he is unworthy of his long-term girlfriend, Erica, and tries to set her up with Tanumura. As with many characters in Murakami’s novels, Kitaru can only connect with her through an intermediary and needs to satisfy his curiosity vicariously. He reasons: ‘I figure, if she’s gonna go out with other guys, it’s better if it’s you. ’Cause I know you. And you can gimme, like, updates and stuff.’

An Independent Organ brings us back into the allegorical world of Murakami where essentially Dr Tokai is going through an existential crisis. Heart surgeon, Tokai has a string of affairs, and eventually falls in love with one of his women. He becomes completely overwhelmed and when she takes his money to leave him for a younger man, he stops eating and becomes a shell of himself, literally dying of a broken heart: “Women are all born with a special, independent organ that allows them to lie . . . ”

It wasn’t until reading Scheherazade that I realised that the unifying theme isn’t specifically ‘men without women’, as I thought it would be similar to Hemingway’s homonymous work (1927). The collection does look at loners haunted by the women who have touched their lives, but it centres on loss and sexuality (often through infidelity), similar to most of his works:

‘Murakami poetically condenses many aspects of post-traumatic experience: first, strangeness—the loss of the familiar; second, the past intruding into the present . . . ; and third, most importantly, the sense of randomness which follows in the wake of traumatic events, which wipe out our need sense of predictability and order’. (Thomas Rosbrow)

Central characters in the collection seek to understand themselves in relation to others—even if through a proxy. As Kafuku said in Drive My Car, ‘I don’t think we can ever understand all that a woman is thinking.’ Kafuku hungers to know why his wife needed to have affairs when they were happy in their marriage; Kitaru needs to know what it’s like to have sexual intercourse with his girlfriend through a proxy; and Habara needs to hear the end of Scheherazade’s story. The woman he dubs ‘Scheherazade’ is Habara’s housemaid. Murakami tantalizes readers, by not divulging why Habara is locked in his tower with only routine visits from his housekeeper for company. But better yet, he allows us to feel the panic of ‘Scheherazade’ sneaking into the house of a schoolboy (she’s infatuated with). She cuts the story short and as with many of Murakami’s short stories the reader is abruptly left with several answered questions. Read Scheherazade here.

Kino is haunting and Murakami’s magical realism is at its best—so much so that I wanted to hide under the covers like the eponymous hero. Bar-owner, Kino is being threatened when a mysterious customer, Kamita, saves the day. The story is punctuated with perfectly formed, but enigmatic lines, ‘No matter how empty it may be, this is still my heart.’ We are shown more of Murakami’s trademark focus on sexuality, ‘There were scars on her breasts, and beside her vagina’. Read in full at: http://www.newyorker.com/magazine/2015/02/23/kino

In Samsa in Love, Kafka’s Gregor Samsa is transformed from insect into man and tries to find his feet in an alien world. A perfect transposition of Metamorphosis offering glimpses at the dystopian world outside. The most visceral of the bunch: Samsa thought his ‘starving belly would consume his own flesh and he would cease to exist.’ He grapples with his new found sexuality when he meets a hunchbacked girl who ‘twisted her body all over much the way the earth twists during a violent earthquake.’ Definitely the most optimistic of the collection, as it’s filled with possibilities: ‘The world was waiting for him to learn.’  Read more at: http://www.newyorker.com/magazine/2013/10/28/samsa-in-love

Men Without Women we meet a man who abruptly receives a call that his ex-lover has committed suicide, which seems to be a recurring episode: ‘This woman was the third woman I’d gone out with who’d killed herself.’ Amidst his poignant reflections, the narrator tries to rewrite his story. Read an extract at: http://www.harukimurakami.com/book/men-without-women

In this charming new collection from Murakami, the women always move out of the line-of-sight and leave the men left questioning their own existence . . . or fading away to nothingness. Definitely recommend if you’re a fan of any of Murakami’s fiction, Kazuo Ishiguro’s The Unconsoled, or Banana Yoshimoto’s Kitchen.