The winner of the 2017 Kim Scott Walwyn Prize was last night named as Alice Curry, founder and publisher of Lantana Press, at a prize ceremony on the gloriously sunny rooftop of Carmelite House, London.

Mary Beard gave witty and rallying keynote speech on women from poets in ancient papyri to the great women of modern day, urging the crowd to continue to push towards equality: ‘outrage gets boring but wit always win’.  Alice Curry, the driving force behind Lantana was praised as a great role model for future generations starting out in publishing by judges of the Kim Scott Walwyn Prize, which recognises the professional achievements and promise of women who have worked in publishing in the UK for up to seven years. 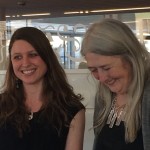 With a background in academia, lecturing in children’s literature, Curry set out on a mission when she set up Lantana Press as an independent house in 2014: to publish picture books with a greater equality of representation and to help facilitate a more global understanding of childhood. Given that in London, fifty-five in one hundred children identify as non-white British, yet only around five in one hundred children’s books published in the UK are written by authors of diverse cultural backgrounds about characters of colour, Curry also identified a potentially lucrative opportunity in this huge market gap. 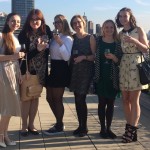 Curry holds several roles within Lantana: editor; publisher; manager of the day-to-day business; mentor to writers from black, Asian and minority ethnic communities in the UK and around the world; director of philanthropic activity, which includes a recent donation of 2000 books to children in Cameroon. Since founding the company, Lantana has published seven picture books with five more in the pipeline, and six of which have been translated into foreign languages. There’s a new distribution deal with Lerner Publishers in the US, and then there are the accolades and awards, most notably winning the Children’s Africana Best Book Award 2016 as well as a Kate Greenaway nomination for Chicken in the Kitchen by Nnedi Okorafor and Mehrdokht Amini. Curry is also a regular keynote speaker on the subject of the need for diversity in children’s books at conferences around the world.

“The need for greater diversity was a common theme in this year’s submission and we were very struck by the entrepreneurial spirit that animated our shortlist. Choosing a winner was a close run decision. Alice Curry stood out, for her radical switch from academia to starting up a publishing business that puts her passion and knowledge to practical use in a highly focused way. We applaud her success and have no doubt she will achieve much more in the years ahead.”

Curry receives £1000, sponsored by the SYP, and a two-day training course of her choice at the PTC.